A great start to my adventures with lovely Russian breakfast companions who turn out to be cellists with the Russian Symphony Orchestra on their way to Rimini for a concert tonight. We spent a lovely hour chatting about the best things to see in Bologna. These lovely young men told me that not only does Bologna have the oldest university in Europe but also two of the oldest church organs that are still in use – of course being musicians they take an interest in such things – a little more trivia for me to add to the memory banks.

Bologna dates back to 1000BC and history really came to life as I meandered first through one, of what remains, of the former walled city gate and then under the amazing porticos (now UNESCO listed as World Heritage) which hark back to the 12th century.  They were originally built to cater for the influx of students that caused a housing shortage. It was decreed they had to be built on private land, so were attached to existing houses, but had to be available to the public to use and it was also stipulated they needed to be wide enough for a person to lie down and be protected from the elements of nature. 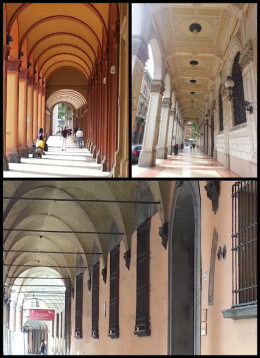 I have it on good authority that there are some 70 kms of porticos which is absolutely incredible. Different styles are located in various areas, so plenty to admire with the common element being they provide wonderful shade from the sun and shelter from the rain to this very day. I can just imagine noble ladies in their lovely long dresses gliding along under these porticos as they stroll across town to visit neighbouring palazzo’s.

I meandered for 6 hours without even realising how time was flying past! The weather was perfect for walking and it was a wonderful treat to be able to fritter away my time soaking in the atmosphere that literally oozed from the squares and small side streets.  A pure delight not to have any schedule to keep for the first time in a very long while.

Tourists are much scarcer than in Rome, Florence or Venice and the majority of those I encountered were Italian tourists. It seems Bologna is a little off the main tourist radar which makes it perfect for the imagination to run riot as I strolled along in my own little world without a cacophony of babble in a multitude of accents breaking the spell.

Jannah as my Goal