The drive from my current home town of Ecija to Malaga yesterday was. much to my surprise, so  picturesque. Very green, peppered with olive groves, scenic hill tops dotted with the occasional houses, dramatic drops and finally the views of the Mediterranean sea sparkling in the distance.

A big shout out and thank you to Nati and Javier for giving me a lift as they headed to visit their friends in Marbella.

The city is a mix of the old and new. Beautiful beaches complete with bars and restaurants, a marina, port and heaps of museums. It’s a city aimed tourists with several information points where they speak a multitude of languages, wheelchair ramps and streets that are no longer cobbled.

A myriad of modern shops and goodness knows how many different restaurants and bars! Plenty of foreign tourists and menus are in English in lots of places which I avoided like the plague! 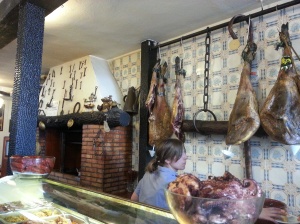 for a cute little place that looked much more local as everyone sitting at the bar was speaking Spanish. Special of the day was plump pulpo grilled to order on the charcoal fire.

I sat for an hour enjoying watching all the action at the bar as the staff bustled about. Tapas is a most civilised way of eating and I love being able to order a dish at a time, especially as if I spot something going past that I fancy, I can just order the same so no cases of menu envy here.

Although situated smack bang in the middle of modern-day Malaga, once I stepped into the Alcazaba I was transported back in time. To an era where life was very different. The perfume of orange blossom, lavender growing wild and the wonderful courtyards all offered a sense of serenity and wonder at the amazing people who built this wonder place-fortress that dates back to the 11th century.

The Alcazaba and Gibralfaro are testament to Malaga’s Muslim past with each boasting 360 degree views over the city, including the sea and the hill ranges and I can just imagine that in days of old they were fantastic vantage points to watch for invaders and homecoming vessels. 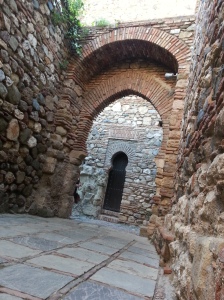 In contrast to the Muslim history is the Cathedral of Malaga, which whilst not as impressive as that of Seville, is worth visiting even if they do charge a E5 entrance fee but I am told it’s free on Sundays. Lots of wonderful stained glass and the interior is not as dark as Seville.

There are also several museums belonging to the various Brotherhoods in Malaga with displays of Semana Santa regalia. I visited Confradia de la Esperanza which was truly impressive with beautiful embroidered garments, gold and silver ornaments, a wonderful painted ceiling depicting the history of the Br

otherhood and boasts the largest floats in Malaga. They were truly impressive. In this photo you can see part of the mural.

Last nigh the streets were being prepared for the Semana Santa parades with chairs lining the main routes and verandahs all decked out with red cloths giving a uniform look to the route. Bands are kicking off the week by parading through the streets where the somber sounds of the drums and trumpet mark their slow procession as the crowds look on. Street stalls are popping up everywhere and the city is ready for a week of celebrations.

The first paso just went by earlier this morning. Watching them walk gave me shivers, the experience is very difficult to describe. Primitive almost and at the same time awe-inspiring. Even though we are in a modern city, the feeling is that of a time when the Church was at the height of its power in Spain. It’s a very eery feeling.

The discipline and dedication of those bearing the paso is incredible. It’s also extremely hot so even more impressive. The crowds that line the route are so thick that it’s difficult to walk about.

I’m off to England now and I have to say I think a week of drums would drive me crackers! It has however been a fascinating experience and when I get back on Sunday there’ll still be parades taking place.

2 thoughts on “Malaga – a city of contrasts”