It’s been a while coming and so many of you have been asking when I am going to put up my Camino blog – you have been very patient! To tell the truth it has been hard trying to put it all into words and decided how I should write the story about such an incredible experience.

This is a unique journey on a mental, physical and spiritual level. The paths have been travelled for centuries and it is easy to picture what it was like in those bygone days.

So what kind of individuals tackle the Camino de Santiago?

All kinds –  from all walks of life – just like our recent group of Dragon Sisters who comprised individuals whose age ranges were between 52 and 75 with the vast majority in their mid sixties.

Religious beliefs ranged from atheist, agnostics, Protestants and Roman Catholic. We were drawn from two sides of the globe – Australia and Canada – with very different upbringings and beliefs. Some knew each other and for others it was the first time they were meeting. I was the only one who had met everyone before.

The common denominator was a spirit for adventure. 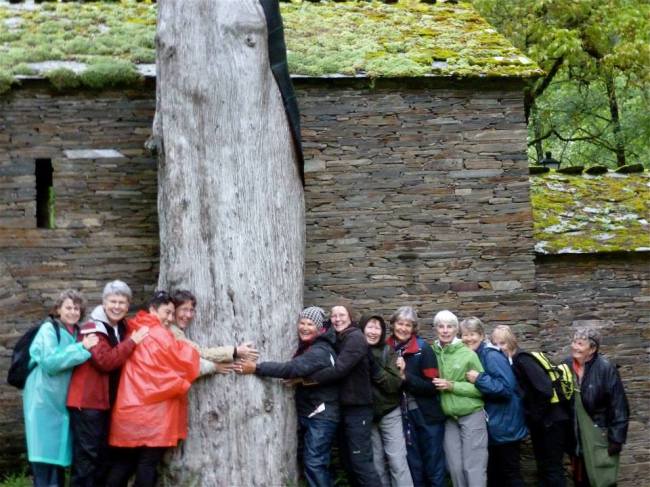 As I meandered along I did, fleetingly, wonder did one need to be of a certain age to appreciate the uniqueness and beauty of nature that lined the route?

Definitely this was not the case as the peregrinos (pilgrims) were  all ages and each seemed to appreciate the beauty by which they were surrounded although our younger friends were only walking about 15km a day compared with our longer distances.

Susanna, a pretty blond 24-year-old, German lawyer commented “I don’t mean to say that you are old but old people are so strong! Much stronger than me.”  Definitely a back-handed compliment from Susanna who was walking alone to fulfil a vow that she would undertake the Camino pilgrimage if she passed her bar exams. Her worried mother had insisted on pre-book all accommodation and a nightly check in but as Susanna progressed along her walk everyone back home in Germany had become reassured that the Camino was safe.

The Camino felt very safe, a complete contrast to most other places where women often need to be careful of where we walk especially if alone.

I must admit I was rather surprised to encounter so many young people, including several Japanese and South Korean university graduates walking and cycling the Camino.

Everyone looked out for one another, offering to freely share supplies of band aids, painkillers, anti-inflammatories and offered advice on how best to deal with sore feet and tired muscles – but more about those in following instalments.

You say you want an evolution...