Derek was my cousin. To be precise, he was the eldest of the Van Buerle cousins. Both of us were born in Malaysia, and I guess Derek has been around my life forever.

We were not the type of cousins that saw each other often. My Dad worked for the United Nations so we lived wherever the UN sent us.

A a child I would see Derek when we went on home leave to Singapore. The visits were every two years. In between those times we’d correspond occassionally. Derek’s Dad, my Uncle Harry, also used to write and send me first day covers of stamps issued in Singapore.

At about 16 Derek was sent to Australia to finish school. I was at boarding school in Beirut at that time. We continued to stay in touch, but not as often, as by this time Uncle Harry and the rest of the family had settled in Perth.

Eventually, in 1981 I came to Australia and made Darwin my home. Derek, footloose and fancy free, came to visit, driving up from Perth. In Katherine he became very ill, I think it was pleurisy – but my memory is not the best – whatever it was, driving was very painful for him. We ended up driving down to bring him up to Darwin.

Derek liked Darwin, got a job and remained in the Territory for a while; we became closer once again. It was nice getting to know each other better as adults. We used to take turns cooking and I have fond memories of Derek pouring through my stack of recipe books deciding what to cook. He was always up for trying something new.

Derek learned to scuba dive while in Darwin, then headed off to the Barrier Reef for a diving holiday. Sorting through a box of stuff the other day, Cheryl and I came across this postcard dated 1987 that Derek had sent to us all. 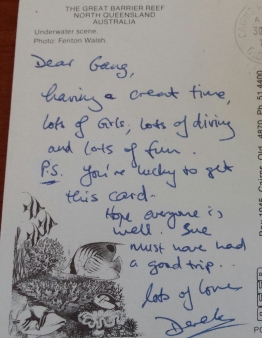 One holiday let to another and he ended up back in Penang, where he met the woman who would become the love of his life – Maree – and mother to his three beautiful daughters.

Over the years, we didn’t see each other very much. I guess our lives got busy with kids and work. I caught up with Derek and Maree in Canberra and in Sydney, and there was the odd phone call and letter.

As cousins, we were all reunited three years ago, when my Uncle Harry, Derek’s Dad passed way in Perth. It was at the funeral. Derek had a bad cold, but was looking forward to going on a cruise with Maree in a few weeks.

The cruise was not to be. Maree called – Derek had been to the doctor. Leukemia. Derek underwent treatment and many of the Van Buerle family members were tested for suitability as a donor for a bone marrow transplant.

During this time, we stayed in close touch. I guess we were all reminded of the fragility of life, the preciousness of family and how fast time flies past. It brings into focus what is really important.

A couple of month ago – just after I had bought the house here on Bribie Island, I got a call from Derek. I remember the moment very clearly. I was sitting outside, on a fold up chair as he said “it looks like I’m going home sooner than expected.”

By this, Derek meant that he was going to be reunited with his Father in Heaven, and would be leaving this earthly life. Treatment options were exhausted. Time was running out. But Derek, in his own way, had made his peace with this world. He had his Christian faith and was unafraid of death.

As we finished our chat,  I promised to visit. Soon. Together with my cousin Cheryl, I flew to Melbourne a couple of weeks later – 2nd of April.  Cousin Michael, who lives in Melbourne also joined us.

Derek was frail and skinny. But still the same old Derek and so thrilled to see us all. 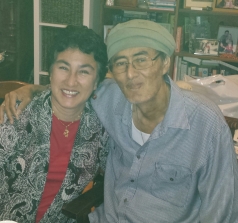 We laughted, we talked about death, we talked of childhood memories, we drank champagne and looked at old photo albums.

We spent a very happy couple of days with Derek, Maree and their three lovely daughters.

Derek kept thanking me for coming. My response “well, I rather come and chat to you when you’re alive than come after you have gone for your funeral.” He laughed saying “blunt, but true.”

As we said goodbye, I knew I was unlikely to see my cousin again in this life. But he was content and at peace with the journey ahead of him.

The end came faster than expected. Derek passed away last night at 7.15 pm.

Vale Derek – you’ll always be my eldest cousin that has a special place in my memories.

For all things writerly!

Tales about a creative life on Dartmoor

Jannah as my Goal

You say you want an evolution...